This is one of those stories that may or may not be a “fake story”. I did not witness this event, but frequently heard references to it early in my advertising career in the 1960s. I was asked to join our creative group in one of those agency meetings called to discuss a project that threatened to turn sour. A senior account executive outlined the potential disaster, then asked the group: “what do you think?” Someone in our creative group quietly said: “cue the condor”. This brought about some nervous laughter and the meeting continued. After the meeting, I asked a fellow copywriter about the condor statement. Here’s what he told me.

In the ‘50s, car advertising turned to showing new cars in exotic locations: lashed to a rock in ocean surf and perched on top of a chimney rock in the Utah desert, were just a few of the ideas creative people developed. Someone suggested having a new car speeding along a desert road near the base of a high cliff. As the car passes a location below a high point of the cliff, a condor dives off the cliff plummeting toward the car, eventually opening it nine-foot wingspan and soaring above the car into the distance. Sounded perfect! Without going into details, a trainer with a condor was found, rehearsals were scheduled, and a hand-built prototype of next year’s car was shipped to the desert.

Rehearsals went off without a hitch, because of their size and weight, condors prefer taking off by diving from a high place. The bird dove off the cliff toward the speeding car, opened its wings at the last second and soared into the distance. Camera operators were strategically placed to follow this action. Everyone was ready for the next day.

The following morning everyone took their places. The director checked with the crew and “actors” by radio. The first “take” began.

The car began moving along the desert road, picking up speed and kicking up a swirl of dust behind it.

The condor handler moved the bird to the edge of the cliff.

As in all the rehearsals, the condor handler gave the bird a slight push off the cliff. 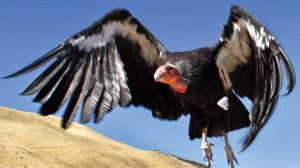 The bird did what was expected. Wings tucked in tight to its body it dove toward the oncoming car.

Then, the unexpected happened! The condor either went on strike, forgot the “soaring” part of his role, or hated the car. Whatever his reason, that bird refused to open his nine-foot wings and crashed into the top of the hand-built prototype.

So, for years afterward, whenever something started to go really sour, someone in the group would quietly say: “cue the condor.”