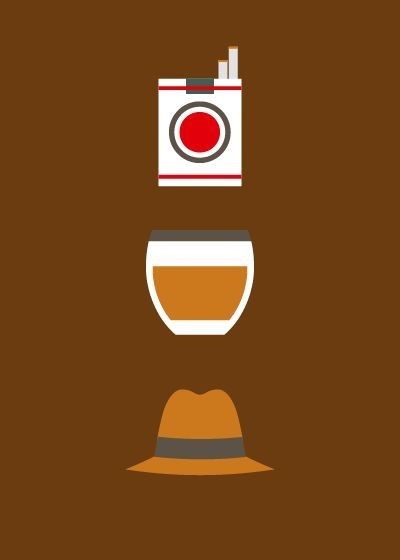 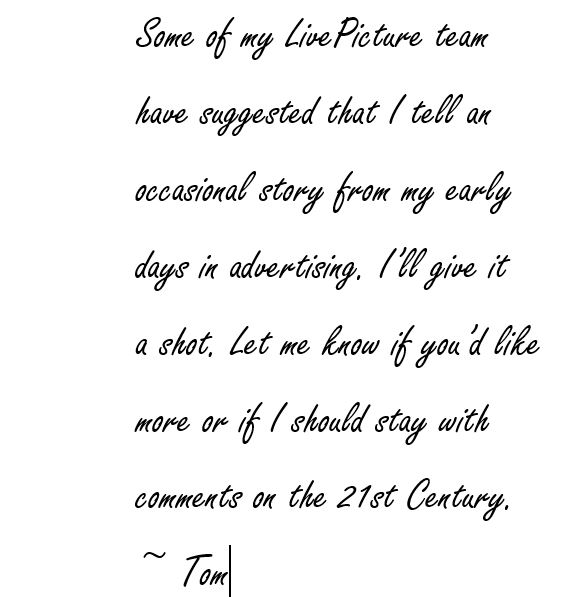 This story goes back to the 1960’s in the hey-day of the Mad Men. I started at Campbell-Ewald (the agency that had the Chevrolet account) as a copy trainee in January of 1961.  The training program was 18 months but you could move faster if you impressed the senior guys in the creative department. One of those guys was Tom Murray, Senior Vice President and Copy Director – the boss of all copywriters in the agency. If there was anybody I wanted to impress, it was Tom Murray. Tom and I traded a few “war stories” from time to time. I was fresh out of the army and a tour of duty in the Far East. He had been a combat pilot in WWII flying missions in Europe. I thought those stories helped form a bond between us but as I look back on it, he didn’t talk much about his experiences in the war – he encouraged me to talk.  He was a good listener. In fact, Tom was a great writer but a soft-spoken, quiet man.  Tall and lanky, with an Oklahoma drawl, when he spoke you really wanted to hear what he said and it was usually valuable advice. Aside from accusing me of taking any ad copy I had written and “sprinkling liberally with commas”, he seemed to like what I wrote. In fact, in less than six months I had graduated from a desk in a hall outside the private offices of the “real” copywriters to sharing a private cubical with another trainee, Marvin Hoenig, who eventually became Creative Director of Doyle Dane Bernbach – one of the hottest creative shops of the ‘60s and early ‘70s.

Moving from that desk in a hallway to sharing a private cubicle with Marv was a sure indication that I was on a fast track and would be off the training program long before the 18 months was over. While our private cubicle was certainly large enough to accommodate two desks and a couple of guest chairs, it was not exactly “executive suite” quality. The walls were painted an industrial green and composed of metal – maybe tin – running all the way to the ceiling. At the top of each wall was a glass window to let light shine through from ceiling fixtures into groups of offices. We called this space “The Submarine” because the green paint, tin walls and multitude of passageways reminded us of the separate compartments on a sub. The wall next to my desk was adjoining the offices of a group called “Promotions”, a separate unit that handled the promotional items for Chevrolet. Along with selecting banners and posters, these were the people who selected and bought logoed golf balls, t-shirts and all kinds of toys that dealers might use to attract customers.

Going into their section of the submarine from our cubicle was difficult. We walked into the hallway, turned right and through a door marked PROMOTIONS.  We also needed to get past a gate-keeper secretary before entering a labyrinth of similar tin offices.  So you can imagine my frustration when, sitting at my desk I heard a strange sound coming from one of the “promotions” offices on the other side of the wall.

This was repeated over and over, numbing my brain and perking my curiosity. It was impossible to concentrate. I HAD TO KNOW WHAT WAS CAUSING THAT SOUND! Walking next door, past the secretary and into an unknown office was out of the question. After all, I was still a trainee with few privileges and no corporate clout. Then it came to me. Carefully climbing up on my desk, I looked through the window at the top of the wall.

The room was empty, aside from a box with Plexiglas walls and top, sitting on a table and creating the sound. The floor of the box was funnel-shaped with a hole in the bottom of the funnel. Inside the box was a single ping-pong ball. It would roll down the funnel floor toward the hole, when the ball hit a small pin next to the hole a burst of air was triggered through the hole, shooting the ball to the Plexiglas ceiling. Bouncing off the ceiling the ball would fall to the funnel-floor and roll toward the hole to start over again. I had no idea what the purpose was (still don’t) except to attract attention. It certainly captured mine.

I stood on top of my desk looking through the window, mesmerized, until I heard another sound: the unmistakable clearing of a throat.  Turning, expecting to see my office-mate, Marv, I stared down at the great man himself: Tom Murray.

We stared at each other. Neither one of us spoke for what seemed like hours. Finally, I felt the need to break the silence.

Thinking that I would be doomed to the training program for months beyond the required eighteen, I hoped to use “curiosity”,  an important ingredient of every great copywriter, to explain my position.

A head nod from Tom but not a word.

Finally, in that Oklahoman drawl, he said: “No, Tommy, I wasn’t wondering that at all.”

With that he turned and walked back through the submarine to his office on Teakwood Row, leaving me to wonder how long I’d be employed as a trainee copywriter – or if I would be employed at all.

As it turned out Tom Murray was either forgetful or forgiving because I graduated from the training program in just 14 months, becoming a full-fledged Junior Copywriter and went on from there to spend over 50 wonderful years in the business.