How I Impressed Arthur Godfrey

Arthur Godfrey drastically changed radio starting in the 1940s. Instead of speaking to “all you folks out there in radio land” he spoke to “you” — individuals listening to their radios at work, in their homes and in their cars. As a result, Arthur became a personal friend rather than somebody giving a speech to large crowds. That made Arthur a perfect spokesman for Chrysler cars in the 1970s. We didn’t like to admit it, but Chrysler was becoming “your father’s car” and we needed to appeal to a generation bewildered by bell-bottom trousers, men with long hair, scraggly beards, earrings and a generation that listened to music by The Who, Led Zeppelin, and KISS.

I watched these trends creeping into my agency’s creative department. While I still showed up in a suit, tie, and a haircut just a step away from what I had in the army I was surrounded by a new generation of copywriters and art directors ten years my junior.

Arthur and his ukulele would reassure an older generation that the world was not entirely crazy. And a Chrysler was just the sensible car for them. 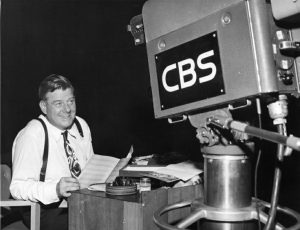 We signed Arthur on and began developing rough scripts. I assigned an excellent copywriter to work with him and that copywriter along with a couple of account execs flew in for a meeting.

It was a disaster. Arthur criticized the scripts, berated the writer and sent our guys back to Detroit to start over. He also made it clear that he did not want that writer in his office again.

We regrouped, rewrote and sent another writer/account exec team to New York and Arthur. The result was the same. This kind, friendly, man threw them out. Told the account exec never to bring that writer back. And to get someone he could work with.

Like all great advertising people, we had a meeting. The solution was obvious. I was to make the next trip. I was a copy supervisor (a title) I had a dozen years’ experience — an asset in working with Arthur. And I was aware of the reception the last two writers received. And tried to prepare for it.

We walked into Arthur’s office at CBS.

Arthur was the epitome of graciousness. Shook hands around and offered me a chair across the desk from him. Called for a round of coffee and led the conversation into small talk as if we’d been getting together like this for years. We eventually got down to business and I made a few suggestions for the scripts. He liked them but had to break for a few hours to rehearse his show. He suggested I work up script outlines based on our discussions. He came back, scanned the scripts, made a few notes on them, handed them back, telling me to finish them and get them back to him. He actually thanked me for coming. 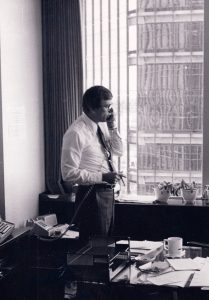 We marched out of CBS – the account guys were relieved, I was triumphant.

In the cab back to the airport, one of the account execs turned to me and said: “You know what Arthur said to me about you before we left?”

“No” I said expecting to hear very high accolades on my perception, skill and writing talent.

Arthur: “No. The nice young man with the suit and the haircut.”

“Couch at LivePicture has been a fantastic resource for creativity and assistance in putting events together. He was instrumental in assisting in a panel for Women in Defense focusing on the topic of Empowering the Entrepreneur. ” – Julie Lanivich, Women in Defense, Michigan Chapter

“Stephen and Jason at Live Picture exceeded my expectations. The systems they offer are modern, informative, and eye-catching. It literally stopped people in their tracks at the tradeshow. They were very easy to work with. With one week’s notice, they edited my video to accommodate their screens, set the whole display up, and took the whole display down. All I had to do was bring the brochures!” – Clisby Jarrard, RCO Engineering